Somalia months away from having new currency

Posted by: Editor1 October 7, 2017 in Latest News Leave a comment

The Somali Minister of Finance says the International Monetary Fund (IMF) is taking the lead in helping Somalia with a grant to print new currency before the end of this year.

Abdirahman Duale Beileh says the IMF will work with the Somali government.

“IMF is ready, from wherever they going to get that money, to help us,” he said. “There are other sources, but we are going to go through IMF.”

In an exclusive interview with VOA Somali, Beileh said the Somali government needs $100 million, half of which will go directly toward printing the new money, and the other half to keep the value of the currency when it circulates.

“The cost of printing the money is about $50 million, and I think there is also about same amount, same quantity will be necessary to deposit and keep it as a reserve to monitor the movements of supply and demand to keep the value,” he said.

He said the cost was the only outstanding issue before printing the money. Strengthening governance issues, accountability issues, skills available in the central bank, the rules and regulations, the monetary systems, the policies, all of these prerequisites have been concluded, Beileh said.

“We are now discussing the timing,” he said.

The Somali central bank has not properly functioned since 1991. The country’s old currency has almost disappeared or is worn out and was replaced by U.S. dollars, or privately printed notes, most of which are worthless fakes.

The government plans to issue both coins and paper money. The only banknote that is still used is the 1,000 Somali Shilling, which buys a cup of tea or a packet of chewing gum. Beileh said this will be the starting number for the new money.

The “1,000 Somali shilling will be the smallest denomination of coin. The biggest bank note of the new currency will be either 10,000 shilling or 20,000 shilling … there is still discussion on this and is yet to be finalized,” he said.

“I’m not privy to the numbers but it will be adequate for the economy of Somalia,” he said.

Beileh said the target has always been to print the money toward the end of the year. The money will be released to the market during the second quarter of next year, he said. 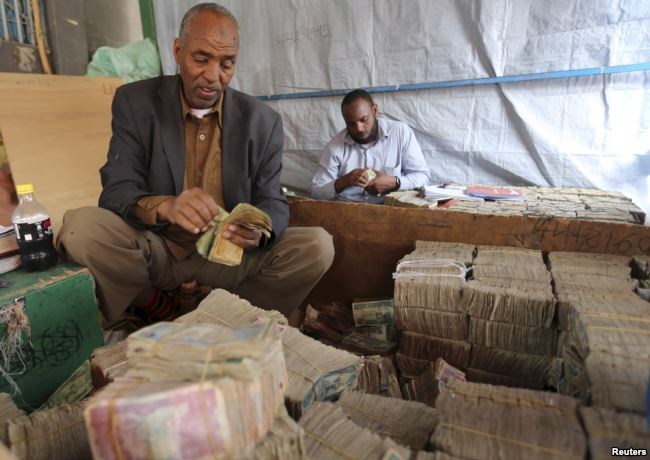 FILE – A money changer waits for customers at a local bureau where $100 U.S. dollars exchange for 750,000 Somaliland shillings in Hargeysa.

One of the biggest challenges will be implementing the mechanism for replacing the old currency and more importantly what to do with the counterfeit money that has been in the markets for many years.

“That really will be the test,” Beileh said. “The counterfeit will be difficult to give good money against bad. It came by exchange of their own funds or their own goods and services but on the other side we need to control that counterfeit money, there will be some decisions that needs to be made as to how much of this bad money should get good money, a lot of talk has to go into that.”

He said the positive thing is that the amount of counterfeit money circulating may not be a lot.

“It’s not a lot when you look at the whole economy, I think it’s around may be 10 percent or 20 percent of the total money circulating.”

Meanwhile the World Bank has released a new report about poverty in Somalia. The survey finds poverty in Somalia is widespread, with every second Somali living in poverty. The survey was conducted last year and is representative of 4.9 million Somali. Somalis are estimated to be 12 million. The areas it does not cover are nomadic people and inaccessible zones because of the conflict.

Utz Pape is a poverty economist for the World Bank. He told VOA Somali that the survey was the first comprehensive snapshot of the welfare conditions of the Somali population.

“What reports finds and states very clearly is that every second Somali lives in poverty, and by poverty we mean living below $1.90 per day, that is the 2011 power purchasing parity estimate,” Pape said. “This means large part of the population is poor, but we also see there are very large disparity between different groups and geographical areas. Household that were displaced tend to be much poorer than everybody else. But also we see a divide between rural household, which tend to be poorer than urban household.”

Pape says there are other non-monetary poverty indicators in Somalia, such as lack of access to infrastructure, clean water, poor sanitation facilities, lack of electricity and limited access to roads. Limited access to education and health and the other indicators is also highlighted in the report.

The World Bank says only 58 percent of Somalis have access to an improved source of water and 10 percent to an improved sanitation, compared with an average of 69 percent and 25 percent in low-income sub-Saharan countries.

Asked about what could be done in Somalia to reduce poverty, Pape said “resilience.”

“Resilience is important to avoid deepening poverty and to avoid additional household falling into poverty,” he said.

Remittances and entry points for different policies and programs, such as social safety net programs or other programs that build up resilience in poor households, access to education and access to health care can improve the conditions, Pape said.

Aden Madobe withdraws from the speaker of parliament contest

Puntland presents to the press soldiers defected from Somaliland